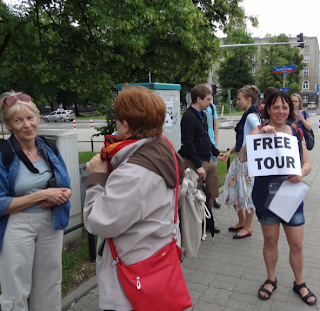 During the first days of the EURO, tours were organized around the Praga neighbourhood of Warsaw for tourists and locals who would like to see some historic and interesting places before they are destroyed and the reality of the public housing situation. The intent was to give tourists visiting during the EURO a chance to see the reality of life just beyond the new National Stadium.

The local authorities were angry at these tours and comments by internet readers were not allowed in the main newspaper. Just days before the tours, crews could be seem making quick paint jobs and putting up banners on buildings in the immediate area of the stadium. Even more absurd for visitors as they only painted some entrances on the street but going into courtyards, anybody could see the reality. 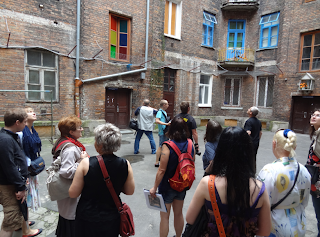 Dozens of people came on the weekend and the tours were organized in four languages. Surprisingly, the most interest was from Varsovians, some of whom even came more than once and asked us to expand the tour to other parts of the neighbourhood. Members of the media also came and the main free daily put the tour on the front page on Monday, with a personal opinion from the author who was quite shocked at what was shown.

Besides the atrocious housing conditions, a clear disregard for cultural, religious, historical and architectural landmarks could be seen. This has been going on for decades. Amongst the first things we visited was the former site of a synagogue which was not destroyed during the war... only to be torn down in 1961, despite being in perfectly good shape. People were shown historic photographs. The site, one of the few important places related to Judaism in the neighbourhood, was simply not considered of any value. The same thing is happening now. We visited historic buildings which were registered as landmarks and got de-registered for developers and are at risk and the rumble of the old butcheries, just destroyed less than a month ago. 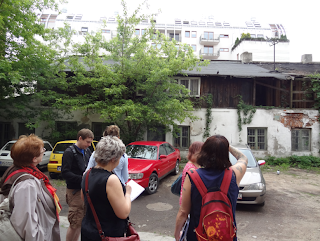 Among the other scandalous things was the presence of a city spokeswoman who on one poor street started calling people good-for-nothings and said that the whole place should be levelled to the ground. This is exactly the attitude of the local political elite and it infuriated people. During the tour activists from the Tenants' Defense Committee made many political comments on how money is spent. For example, we know the cost of many investments like the repair of the facade of the firehouse for 3.1 million zloties. This is just a repair of the facade. We pointed out that by contrast, capital repair of another building would cost just 3 million zloties and the construction of new housing for 69 families cost 15 million. So we questioned the use of public money on extra and unnecessary new bus shelters, new facades, banners for the Euro etc. when things were falling apart. We also pointed out some things bought by the city at inflated prices, saying how much they cost and showing where the city dismantled architectural elements of great value, asking what happened to them. The spokeswoman of course had no comments on any of that. 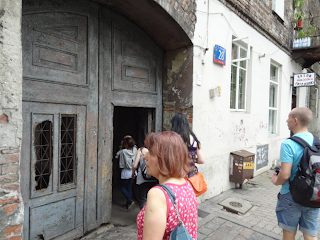 This house is where the Committee was born. :-) 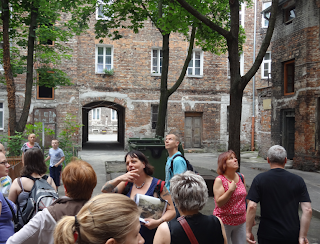 An example of public housing in the neighbourhood. (Not the worst!) 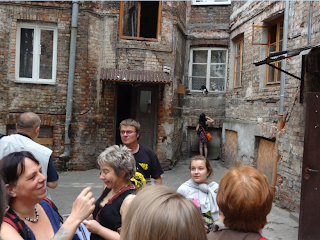 Less than 100 metres away from the local council and the Voivoidship Marshall's office, people live without heat, in crumbling tenaments, where the doors are open all day and night and the fire hazards are significant. Absolutely no safety measures or fire extinguishers are provided, despite the dangers and the arsons which occured in the neighbourhood. The house next to this was set on fire.

Many fires are started in basements and entrances like this in one of the houses we visited. Luckily here there was not too much damage. 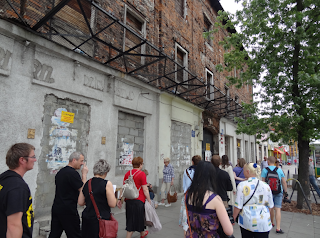 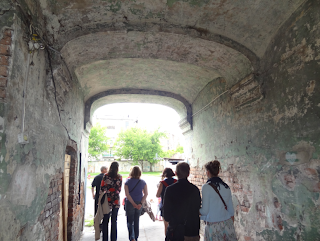 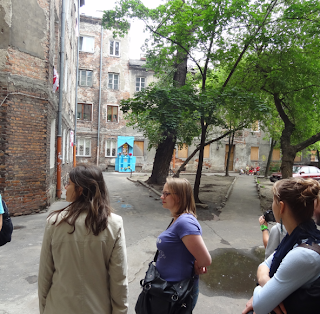 Mary is always kept in good shape, even if the building around is crumbling down. 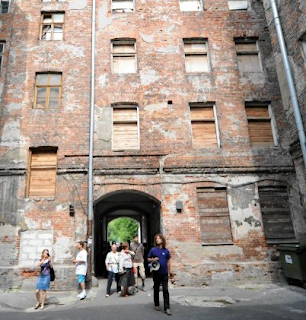 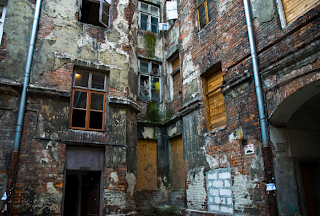